On Saturday March 5, 85 mushers and their teams of 16 Alaskan Huskies left Anchorage, Alaska, as the 2016 Iditarod dog sled race began. On or about March 14 one of the lead dogs will cross the finish line in the Alaskan city of Nome with at least seven or eight other team members and a musher who will then be crowned the 2016 Iditarod Champion. It has been called the last great race on earth. 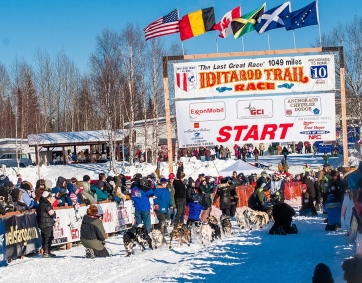 Who will win the 2016 Iditarod, an ultra- ultra marathon where little things like minor foot injuries to a dog can take a team out of contention? That’s easy – the musher that takes best care of his team during the 1,000-mile race. The brutal race includes a trek down the frozen Yukon River and a crossing of the Bering Sea and one mistake can cost you the race. Communication and trust between musher and dog team is critical.

Last year, veteran Iditarod musher and defending champion Dallas Seavey spoke at our leadership retreat about what taking care of the team means to him. When he talks about taking

care of the team he mostly talks about creating a rhythm.

His team understands the rhythm because Dallas communicates  it to them frequently and consistently by his actions. They know every time they get to a check point, they are going to eat well and rest for four to five hours. Dallas is not going to push them hard just to lead the race at a particular insignificant point along the course. He is the youngest finisher and winner of the Iditarod and has won three out of the last four races. Those results validate his strategy.

Does your UMass Memorial team have rhythm? Do you meet on a regular basis and talk about how things are going? Does the manager in your area engage you in making decisions before they are made?

Does leadership come to meet with your team on a regular basis and talk about what is going on, or just when there is a problem? Are you an active participant in the team huddles in your area?

These are some of the questions we will be asking as we dig into the engagement survey results in different areas across the system.  Meeting on a regular basis and discussing how things are going and solutions to the many problems we face are, from my perspective, the keys to creating team rhythm and making UMass Memorial better for our patients and our caregivers.

At this year’s Champion of Excellence event in September you’ll have a chance to meet Dallas and hear about this year’s race and how his long rest/ fast run strategy worked.  He is currently in 2nd place at the writing of this blog post. This year as in the past, Dallas is resting his team longer at the early check points and creating a rhythm that will hopefully allow him to win the last great race on earth.

By the way you can follow Dallas and the other mushers at iditarod.com

Thanks for taking great care of our patients and your team mates,

This site uses Akismet to reduce spam. Learn how your comment data is processed.